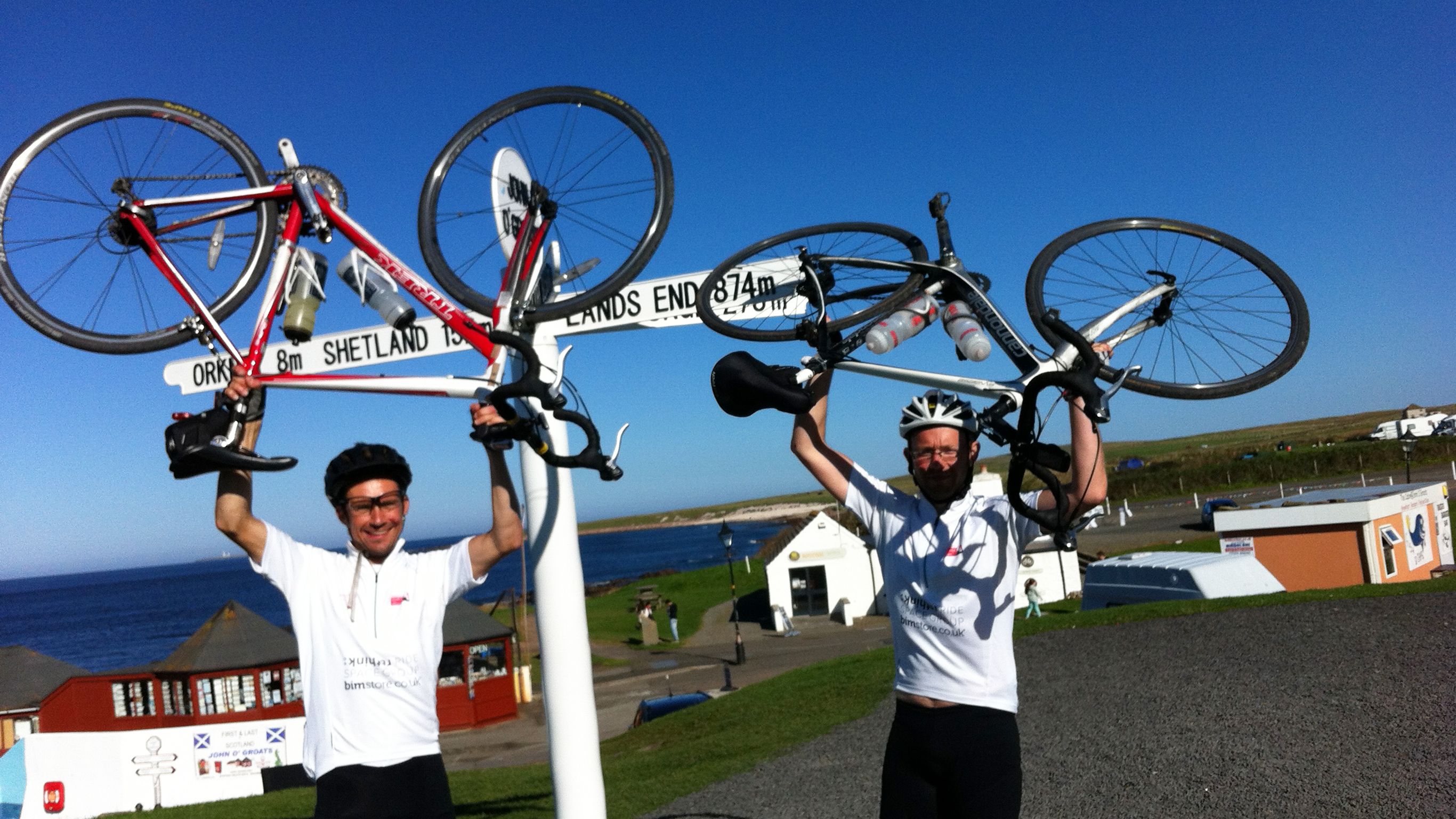 Luke Westoe and Darren Purvis of Space Architects have completed the Andrew Grounsell Challenge to raise funds for Maggie's and the Sir Bobby Robson Foundation in memory of their friend and colleague, Andrew Grounsell.

Luke and Darren, both cycling enthusiasts, created the AG Challenge which consists of completing the Three Peaks Challenge - a feat in itself - but with the added gruelling task of cycling to and from each mountain, starting the journey in Newcastle.

The challenge aims to 'kick cancer in the saddle', and they have already raised almost £5,000 for the two charities, which were important to Andrew Grounsell and his family.

The formidable challenge ultimately involved cycling and walking a total of 1,000 miles and climbing an incredible 59,663 feet, ascending over 40,000ft by bike and climbing a further 10,000ft by foot over the Three Peaks. All in just 9.5 days.

Day one began at the Space offices. After a cheery farewell, the pair visited Maggie's before heading to the Sir Bobby Robson statue at St. James Park, and the first leg of the two-day cycle south to a campsite near Ketterwell for the night, along with Andrew Bumfrey who was in charge of the support van.

On day two the alarms rang out at 6.30am and by 7:30 am Darren and Luke were on their bikes after a breakfast consisting of corned beef pie - a hearty meal for the cycle to Snowdonia in Wales, and climbing the first of the Three Peaks Challenge.

Day three saw another very early start with Luke and Darren in the saddle for just after 7 am -and a hilly cycle up to Pen-y-Pass amidst the growing crowds of tourists.

On day four it's a goodbye to Wales and a long 130 miles to cycle with a pitstop in Rhyl and then to the Maggie's Centre at Clatterbridge Hospital.

Day five saw the pair hurry toward Scafell Pike for another long and tiring day, starting the climb at 1:30 pm after the quick-change routine from cyclists to hikers to combat the dreadful weather. They finally returned from the highest mountain in England after 8 pm, and they still had to complete a quick 8-mile ride to Keswick Youth Hostel for the night.

Day 6 began with the now familiar 6:00 am alarm call for the Keswick to Hamilton leg, seeing them enter country number 3 on this epic journey - Scotland.

This leg saw the pair cycle without their trusty support van, now being driven by a colleague, Phil Lloyd, but they all met up in Hamilton that night with ever-growing aches and pains.

Another early start began on day seven with cereal for breakfast courtesy of the contents in the van (renamed Thunderbird 2), which were kindly supplied by Morrisons, and their trek toward Fort William amidst the early morning traffic.

Once away from Glasgow the hills were soon their focus providing a steady but long climb before finally arriving at a hotel in Fort William.

On day eight the early alarm bell rang for the journey to Ben Nevis - the final Peak, this time assisted by Phil who acted as a navigator through the often hazardous paths.

The 3-hour climb began gently and then as expected became a stepped ascent into the clouds as the temperature dropped. Around 4/5 from the top, the cloud cleared and presented the trio with panoramic views of the Lochs and mountains.

The descent back to the van took a similar time to the climb, but it was time to change into cycling gear for the last 50 miles of the day to reach Tyndrum and the log cabin for the night. By now the pair were both exhausted and lifeless from the tough climb through the Glencoe pass having climbed over 7000ft on the bikes.

The penultimate day arrives for the Tyndrum to Edinburgh leg with backsides in saddles for 7 am. It was a bitterly cold 90-mile journey with stops at the Maggies Centre and Forth Valley, The Falkirk Wheel and the original Maggie's building in Edinburgh - the first Maggie's Centre. Darren and Luke saw first-hand why Maggie's Centres are so important as a place for patients and their families to remove themselves from the hospital environment, and how the architecture and external landscaped spaces must help users.

The last day finally arrived with the journey from Edinburgh to Newcastle and was tinged with mixed emotions all around - sadness that the challenge is drawing to a close, but also elation that home comforts await.

The ride to Bamburgh was extremely hard, with the headwind slowing their pace and draining their already tired legs. The pair also had to contend with the speeding traffic on the A1 causing the bikes to be pulled towards the vehicles while trying to avoid the 'cat eyes' which acted as obstructions.

Arriving in Bamburgh was an emotional moment. Family and friends were waiting at the meeting point at St Aidan's church (where Andrew's ashes were laid to rest) including Andrew's wife Jo, and two of Andrew's good friends who joined in the journey to Embleton.

The pair were delighted to be joined by everyone, and spirits were high as they reached Embleton where the friends dropped out of the ride leaving Darren and Luke to continue to Newcastle and the Maggie's Centre alone.

The finish line was soon in sight and friends, family, colleagues and Andrew's family were there cheering them on. Even Sir Bobby Robson's wife, Lady Elsie had turned out to welcome the AG team of riders and support drivers home.

The flashing of cameras and mobile phones were everywhere, but the pair were finally treated to Champagne and chocolate cake and the company of all their supporters - providing a memorable way to finish the Andrew Grounsell Challenge.

The 9.5 days away were tough, exhausting, mentally and physically draining, exciting, entertaining and a true adventure.

"Who would have known that you can cycle so far, climb three national peaks and raise lots of funds for such important charities all from one conversation between Luke and me at Andrew's funeral.

"I'm exhausted but relieved to have finished and very happy that everyone's come out to welcome us back to Newcastle because it's been a very long ten days.

"Ultimately, it's been worth it though."

To donate in support of The Andrew Grounsell Challenge, please visit http://uk.virginmoneygiving.com/agchallenge